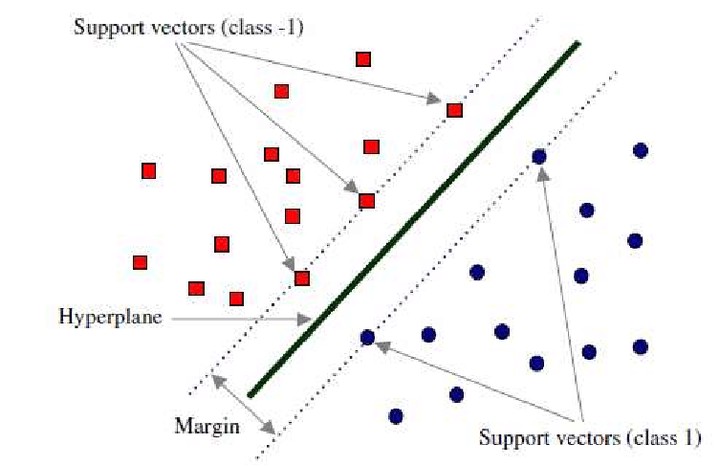 What does Support Vector Machines do?

Support Vector Machines are supervised learning models for classification and regression problems. They can solve linear and non-linear problems and work well for many practical problems. The idea of Support Vector Machines is simple: The algorithm creates a line which separates the classes in case e.g. in a classification problem. The goal of the line is to maximizing the margin between the points on either side of the so called decision line. The benefit of this process is, that after the separation, the model can easily guess the target classes (labels) for new cases.

Maybe you say now, that this probably only works for a low dimensional problem, e.g a data set with only 2 features, but that is wrong! Support Vector Machines are actually very effective in higher dimensional spaces. It is even very effective on data sets where number of dimensions is greater than the number of samples. This is mainly because of the kernel trick, which we talk about it later. Further advantages of Support Vector Machines are the memory efficiency, speed and general accuracy in comparison to other classification methods like k-nearest neighbor or deep neural networks. Of course they are not every time better than e.g. deep neural networks, but sometimes they still outperform deep neural networks. SVM is based on the idea of finding a hyperplane that best separates the features into different domains.

Difference between Linear and Non-Linear Data

To clear everything up, I explain quickly what it is all about the linear and non-linear data thing. We talk about linear data, when we can classify the data with a linear classifier. The linear classifier makes his classification decision based on a linear combination of characteristics. The characteristics are also known as features in machine learning. The following picture will make things more clear.

Consider a situation following situation: There is a stalker who is sending you emails and now you want to design a function( hyperplane ) which will clearly differentiate the two cases, such that whenever you received an email from the stalker it will be classified as a spam. The following are the figure of two cases in which the hyperplane are drawn, which one will you pick and why? take a moment to analyze the situation below.

I guess you would have picked the fig(a). Did you think why have you picked the fig(a)? Because the emails in fig(a) are clearly classified and you are more confident about that as compared to fig(b). Basically, SVM is composed of the idea of coming up with an Optimal hyperplane which will clearly classify the different classes(in this case they are binary classes).

The basic intuition to develop over here is that more the farther SV points, from the hyperplane, more is the probability of correctly classifying the points in their respective region or classes. SV points are very critical in determining the hyperplane because if the position of the vectors changes the hyperplane’s position is altered. Technically this hyperplane can also be called as margin maximizing hyperplane.

Let’s say there are “m” dimensions: thus the equation of the hyperplane in the ‘M’ dimension can be given as =

the equations of each hyperplane can be considered as:

Explanation: when the point X3 we can say that point lies away from the hyperplane and the equation determines that the product of our actual output and the hyperplane equation is greater 1 which means the point is correctly classified in the positive domain. for the point X4:

Explanation: When Xi = 7 the point is classified incorrectly because for point 7 the wT + b will be smaller than one and this violates the constraints. So we found the misclassification because of constraint violation. Similarly, we can also say for points Xi = 8. Thus from the above examples, we can conclude that for any point Xi, if Yi(WT*Xi +b) ≥ 1: then Xi is correctly classified else: Xi is incorrectly classified. So we can see that if the points are linearly separable then only our hyperplane is able to distinguish between them and if any outlier is introduced then it is not able to separate them. So these type of SVM is called as hard margin SVM (since we have very strict constraints to correctly classify each and every datapoint).

We basically consider that the data is linearly separable and this might not be the case in real life scenario. We need an update so that our function may skip few outliers and be able to classify almost linearly separable points. For this reason, we introduce a new Slack variable ( ξ ) which is called Xi. if we introduce ξ it into our previous equation we can rewrite it as

thus our objective, mathematically can be described as;

This formulation is called the Soft margin technique.

it can be interpreted that hinge loss is max(0,1-Zi).

What is Kernel trick?

Coming to the major part of the SVM for which it is most famous, the kernel trick. The kernel is a way of computing the dot product of two vectors x and y in some (very high dimensional) feature space, which is why kernel functions are sometimes called “generalized dot product.

How does the Kernel method works?

Pros and cons of SVM:

Pros: * It is really effective in the higher dimension * Effective when the number of features are more than training examples * Best algorithm when classes are separable * The hyperplane is affected by only the support vectors thus outliers have less impact * SVM is suited for extreme case binary classification cons: * For larger dataset, it requires a large amount of time to process * Does not perform well in case of overlapped classes * Selecting, appropriately hyperparameters of the SVM that will allow for sufficient generalization performance * Selecting the appropriate kernel function can be tricky